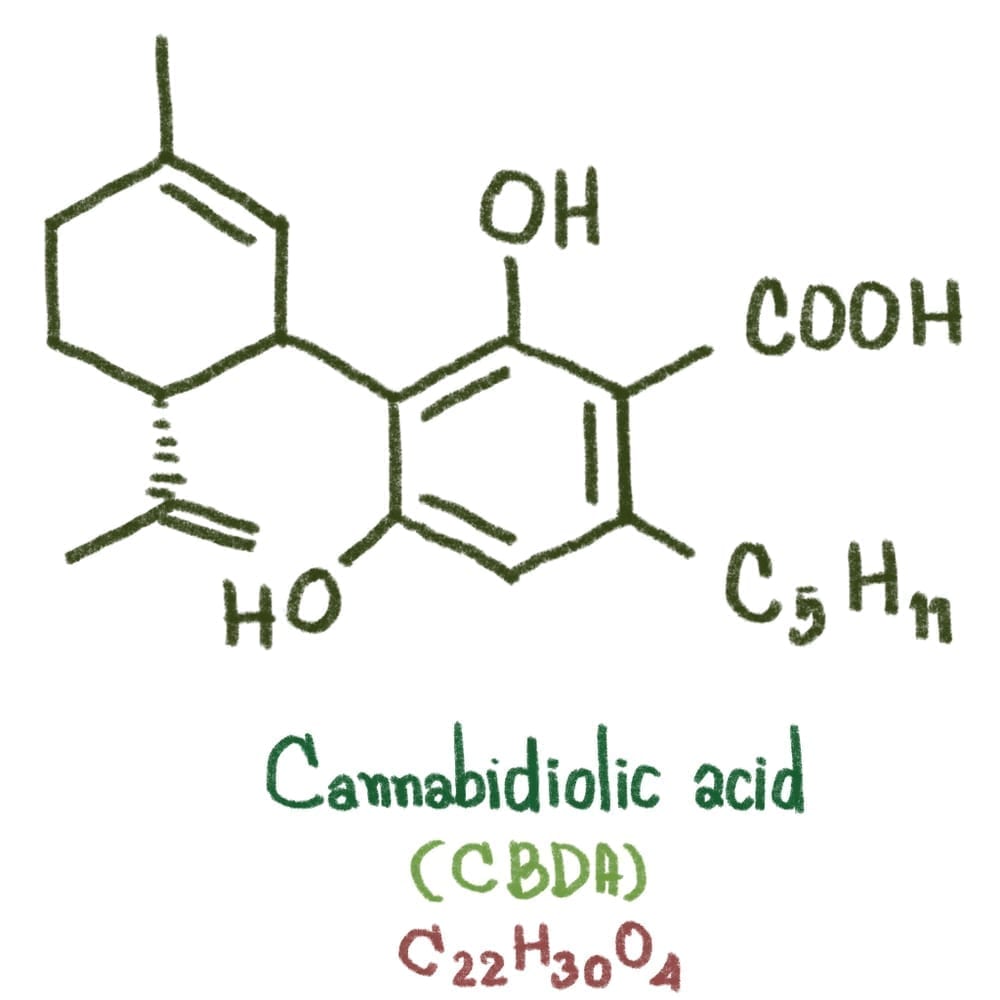 Anyone who has been taking CBD for a while likely has a decent understanding of how it works.  CBD is a cannabinoid, and so it serves a unique purpose in the body. That purpose is binding with cannabinoid receptors to perform regulatory actions. This is also the role of the endocannabinoid system, which accumulates cannabinoids. It does so to sustain balance throughout the body.

Any experienced hemp enthusiast knows that CBD isn’t the only cannabinoid found in the hemp plant.  Further, from a biological standpoint, hemp and cannabis in general have some pretty unique qualities that relate to how the compounds interact with the body based on various factors.

We believe that there’s a lot of value in understanding each compound that naturally occurs in hemp.  CBD is capable of providing so much to the bodily system. Yet, it’s only one of hundreds of compounds found in the hemp plant. CBDA is extremely unique in that it’s actually a precursor to CBD.

Cannabinoids and the Human Body

To appreciate what CBDA is and what it may be able to do for you, it’s important that you understand what cannabinoids are, and how they work.  Cannabinoids are a class of compounds that are essentially unique to the cannabis genus.  Both marijuana and hemp belong to this genus. It’s also important to note that only hemp is federally legal, because unlike marijuana, it can’t get you high.

However, that doesn’t mean that other cannabinoids in hemp aren’t just as capable of supplying you with unique effects.  Cannabinoids function in the body in a way that’s very different from other compounds that are found in plant material.  This is because only cannabinoids interact directly with the body’s endocannabinoid system.

The endocannabinoid system is a complex bodily system that was first identified in the 1990s.  Since then, a lot of research has taken place that has given us insight into just how critical its function is.  Found in every mammal, the endocannabinoid system plays a major role in promoting balance throughout the body, which is a state of equilibrium in which each bodily system is functioning to its highest potential. [Source]

In order for these cannabinoid receptors to fulfill their important roles, they need cannabinoids, such as the ones that occur in hemp.  We now know that the body produces cannabinoids on its own.  But most of us need supplemental cannabinoids from outside sources if we are to fully support our endocannabinoid systems.

Each cannabinoid in hemp works with the endocannabinoid system in a different way.  Some bind with particular cannabinoid receptors to promote specific effects.  This explains, for instance, why CBN has a reputation for bliss. While other cannabinoids may be more geared toward other uses.

Now that you have a good understanding of cannabinoids and the endocannabinoid system, we can explain CBDA, which is yet another cannabinoid that occurs in the hemp plant.  What makes CBDA different from cannabinoids that we frequently talk about, like CBD, CBG, CBN and THC, is that this particular compound acts as a precursor to both CBD and THC.  Basically, both CBD and THC are CBDA that was exposed to specific conditions to change the molecular structure, and therefore the function, of the cannabinoid.

Most of us know that in order for CBD or THC to be “active,” heat must be applied.  This is, for example, why we smoke or cook cannabis rather than eat the raw buds.  Before heat has been applied, they have a different molecular structure that produces different types of effects in the body.  Also, these cannabinoids aren’t nearly as potent unless they have been heated.

When we use a standard hemp product like a tincture or edible, almost every time, we’re administering to ourselves cannabinoids that have undergone this heating process.  Most companies that produce hemp goods use a process called decarboxylation as the final step to developing their hemp extract, which will be added to other ingredients to produce a specific formula.  Decarboxylation is a fancy word for applying a controlled amount of heat to the compounds to activate CBD, THC and so on.

Before CBD and THC are Heated, They’re CBDA

Therefore, CBDA, which is short for cannabidiol acid, is basically a raw cannabinoid.

There’s a misconception that cannabinoids are useless unless they’ve been activated by heat. Whether it be by smoking the raw flower or applying decarboxylation to a hemp extract.  This really isn’t true.  Now, we have lots of research showing us that just because “raw” cannabinoids like CBDA aren’t felt as potently as ones that have been activated, this doesn’t mean that they can’t provide unique effects that make them worthy of trying on their own.

What are the Uses of CBDA?

One thing to note about CBDA is that it doesn’t bind with specific cannabinoid receptors in the body belonging to the endocannabinoid system.  This complex process can only occur when cannabinoids have been activated, so to speak.  Many would assume that this means that raw cannabinoids are useless, but now we know that this is far from the case.

One thing that CBDA has been found to do is inhibit the secretion of enzymes that lead to cellular disruptive effects throughout the body.  Cellular disruption is the root cause for a wide range of common issues, ranging from discomfort conditions like stiff joints to gut ailments.  Further, cellular disruption can weaken the body’s natural defenses. Hence, it’s important to be able to manage it in a way that’s as gentle and natural as possible.  CBDA may be a potent anti-soreness agent.

Another study found that CBDA may play a role in balancing serotonin secretion.  Serotonin is a neurotransmitter that plays an enormous role in our mood.  Depression is considered to be linked to a serotonin deficiency, as this hormone induces happiness and motivation.  If CBDA can improve the production of serotonin in the brain, as this study suggests, it’s worth considering for its potential therapeutic value when it comes to mental wellness.

How is CBDA Made?

CBDA isn’t produced by man, as it naturally occurs in hemp.  It’s a raw compound that exists in the flowering buds of the female cannabis plant.  But, it can be extracted using various methods.

How Can I Get CBDA?

In order to experience the potential effects of CBDA for yourself, you’ll need to find products that clearly state that they offer this cannabinoid.  Standard hemp products that have undergone the decarboxylation process, which is the large majority of CBD goods on the market today, will not offer CBDA.  More companies though, are incorporating pure CBDA into their formulas. They believe that the raw cannabinoid offers benefits that are unique from other compounds found in the hemp plant material.

Products made with CBDA can come in all kinds of forms, just like CBD products that we’re used to.  You may be able to find CBDA tinctures, edibles and even topicals.

And until now, has been critically undervalued.  Now, you can see that the research behind CBDA is actually quite promising.  If you want to see what CBDA can do for you, look for raw hemp products which clearly indicate that they contain this specific cannabinoid.

Pure CBD Now hsve these products you can check: